While every effort has been made to follow citation style rules, there may be some discrepancies. Please refer to the appropriate style manual or other sources if you have any questions. Select Citation Style
Osterloh, Zoe. "Money". The Day, Invalid Date, https://theday.co.uk/money-3/. Accessed 11 August 2022.
Copy Citation
X

From coins to crypto: Money has evolved over thousands of years.

Is money humanity's most useful invention? Together, people around the world today own nearly one quadrillion pounds. But how did it all begin, and what will money look like next?

Q: What exactly is money?

A: Money is what we use to buy and sell things - we need it to buy lunch, to pay for a cinema ticket or get a school uniform.

As an actual object, money has no real value. It is only valuable because we trust that it is worth something.

Q: Where did money come from?

A: Before money, people used a barter system. They traded one good for another.

But bartering had it's problems. It was slow. People began using valuable items to pay for goods. These were the first basic currencies. They included shells, amber, meteorites and even live cows.

The first known official coins emerged in Lydia in 600BC.

Q: Who owns the world's money?

A: Today, the top 1% of wealthiest people own over 50% of the world's wealth.

The eight richest people in the world have the same amount of money as the poorest 50%.

Some countries, like Finland, have thought about giving every adult a universal basic income. This is a regular payment given to everyone in society.

Q: What happens when money loses its value?

A: In the early 2000s, the government in Zimbabwe needed more money. So they decided to print more - and lots of it. With more money in the system, each dollar was worth less. Prices rose. At one stage, $100 trillion would not pay for a single bus ticket.

Q: Does every culture see money the same way?

A: Not at all! Russians avoid whistling at home because they believe it will cause them to lose money. In the Czech Republic, people carry fish scales in their wallets to bring good fortune.

Q: What is the future of money?

A: Throughout history, currency evolved from shells and cows to credit cards and mobile payments.

One unknown is the future of cryptocurrencies. In September 2021, El Salvador became the first country to make Bitcoin an official currency. Others may follow suit.

Valuable – Of great worth, or value.

Lydia – The Kingdom of Lydia was located in Asia Minor in modern-day Turkey.

Universal – Affecting everyone or everything.

Income – Money that is gained from doing work.

Finland – Between 2017 and 2018, Finland ran an experiment in which they paid 2,000 unemployed people £490 a month. The participants had no obligation to find a job, nor would they lose the money if they got one.

Zimbabwe – Zimbabwe is a country in southern Africa. The British once ruled the land and called it Southern Rhodesia. A white government later called it just Rhodesia. Zimbabwe gained independence under a black government in 1980. The capital is Harare.

Debts – Something, usually money, owed to someone else.

Fish scales – In the Czech Republic, fish scales symbolise money because they look like silver coins.

Superstitions – Beliefs or habits that are often based on a fear. Fear of 13 is a superstition.

El Salvador – El Salvador is the smallest of the seven countries in Central America. It is also the most crowded. Its capital is San Salvador. 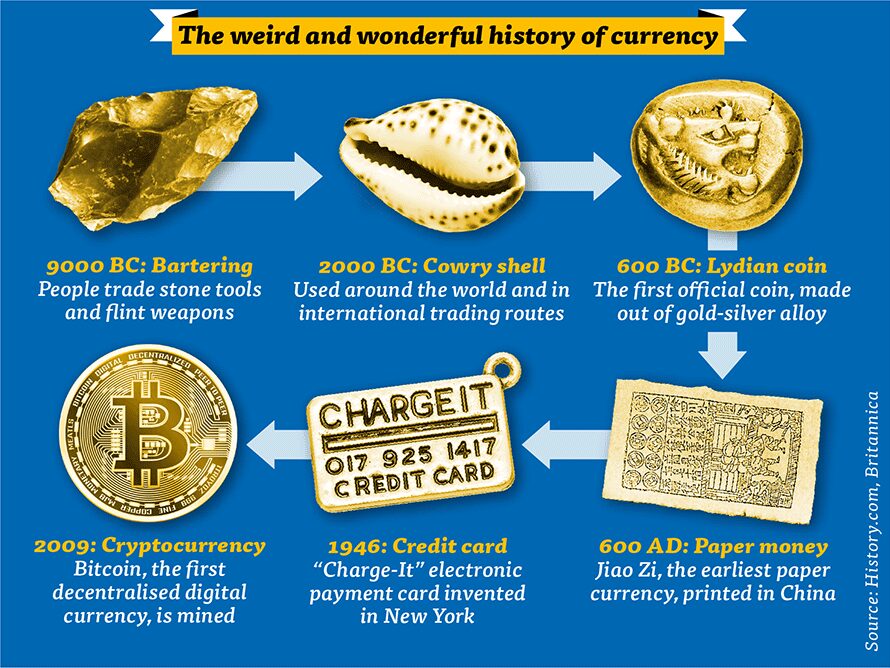 From coins to crypto: Money has evolved over thousands of years.

Is money humanity’s most useful invention? Together, people around the world today own nearly one quadrillion pounds. But how did it all begin, and what will money look like next?

Experience The Day and try with your students for 7 days