While every effort has been made to follow citation style rules, there may be some discrepancies. Please refer to the appropriate style manual or other sources if you have any questions. Select Citation Style
Osterloh, Zoe. "Exoplanets". The Day, Invalid Date, https://theday.co.uk/exoplanets-3/. Accessed 3 July 2022.
Copy Citation
X

Watch this space: Scientists are looking for a habitable planet.

Are we alone in the universe? We have found thousands of planets outside our solar system. Some say it is only a matter of time before one shows signs of intelligent life.

Q: What is an exoplanet?

An exoplanet is any planet outside of our solar system. Exoplanets come in all shapes and sizes, from gas giants double the size of Jupiter to tiny, rocky Moon-sized worlds.

Some planets orbit two stars. Other rogue planets don't orbit any star at all, but roam around the universe in darkness.

Q: How many are there?

The number of exoplanets discovered by NASA is more than 4,000.

However, this is just a drop in the ocean compared to what is probably out there.

Across the universe, astronomers estimate there are one billion trillion stars (that's one with 21 zeroes). The number of planets waiting to be found is truly unimaginable!

Scientists use many different telescopes and sensors on the ground and in space to find exoplanets - but it is not easy!

Exoplanets are hundreds of times fainter and smaller than the bright stars they orbit. It is very rare that an exoplanet can be seen directly through a telescope. Instead, most are detected by measuring when a star dims as a planet passes in front of it.

Q: Are exoplanets similar to Earth?

Mostly, no! The universe is a weird and wonderful place. WASP-76b rains iron. The surface of Kepler-10b is covered in flowing lava. On HD 189733b, wind speeds of 5,600 miles per hour whip showers of melted glass into the ground.

Q: Are aliens out there?

No sign of aliens so far. However, we have found dozens of planets that could potentially be home to life. Astronomers think there could be 40 billion Earth-sized, habitable planets across the universe.

Q: Will we ever visit an exoplanet?

Not for a very long time, if ever. Our nearest exoplanet, Proxima Centauri b, is 4.24 light years away. NASA's super-fast New Horizons probe, which is currently approaching the very edge of our solar system, would take over 54,000 years to get there. Besides, we still haven't visited Mars, the closest planet in our solar system.

Orbit - Circle an object in space. For example, the Moon orbits Earth.

Rogue - Something which lives apart from others and behaves unpredictably.

Habitable - Able to be lived on.

Light years - One light year is 5.88 trillion miles - or the distance that light can travel in one year. 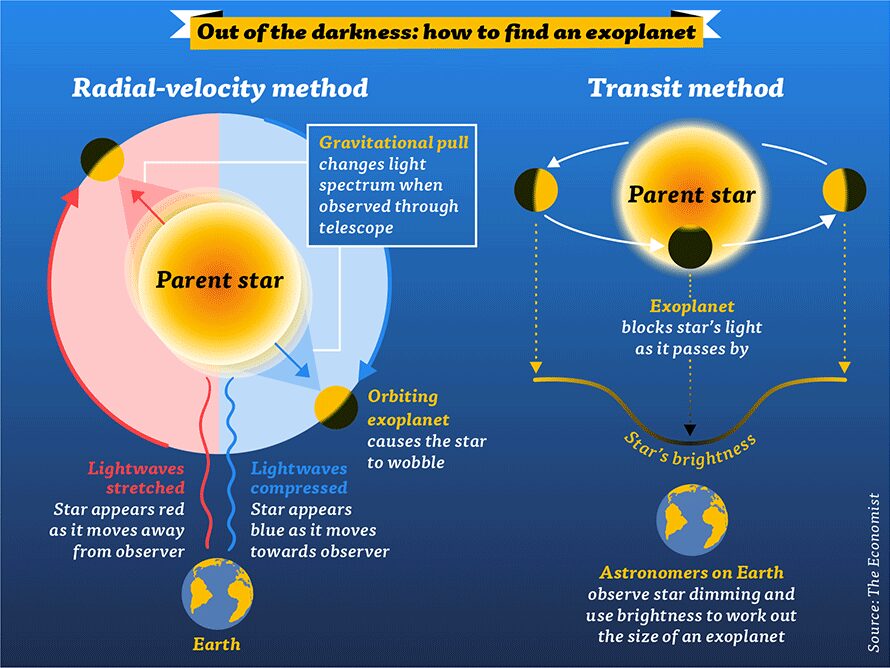 Watch this space: Scientists are looking for a habitable planet.

Are we alone in the universe? We have found thousands of planets outside our solar system. Some say it is only a matter of time before one shows signs of intelligent life.

Experience The Day and try with your students for 7 days